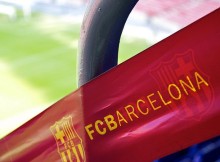 Barcelona
Barcelona are reportedly prepared to up their efforts to secure a deal for Lyon forward Memphis Depay. With Lionel Messi staying at the club for the next season,
Read More