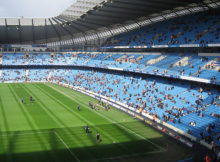 Chelsea
Premier League rivals Manchester City and Chelsea are reportedly both weighing up a summer move for Leicester City attacker James Maddison. The England international has been in scintillating
Read More

England
Leicester City midfielder James Maddison is reportedly the subject of interest from Tottenham Hotspur, according to The Times. The 22-year-old, who joined the Foxes from Norwich in the
Read More