Manchester City and Manchester United could reportedly slug it out over the summer for the signature of Barcelona midfielder Frenkie de Jong.

De Jong’s future at Camp Nou looks uncertain, with one report claiming that the 24-year-old ‘is not completely happy’ at Catalonia and is considering an exit this summer. 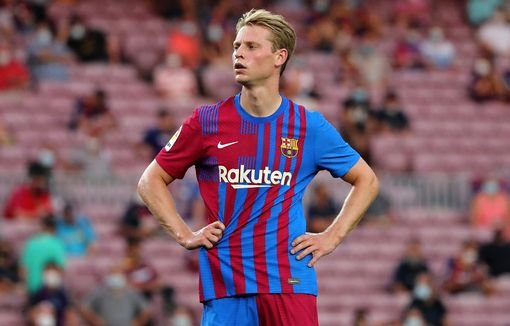 Manchester United, Paris Saint-Germain and Bayern Munich have all been credited with an interest in the Dutchman, but Fichajes reports that the Premier League champions Manchester City are the latest club to join the race.

The report goes on to claim that Pep Guardiola is an admirer of the midfielder and believed he would be a ‘great reinforcement’ to his squad ahead of the 2022-23 campaign.

De Jong is under contract with the Blaugrana until June 2026, and he could be available for around €68.8m this summer.

The Netherlands international has contributed 13 goals and 17 assists in 136 appearances for Barca across all competitions.